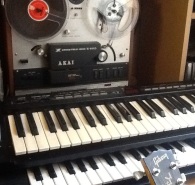 Kid on the Mountain

This is music from my friend Dave (a drummer) who lives in Somerset.  We have known each other since the early 1960s – in fact I believe friend Derek and I (both guitarists) told Dave he had to take up drums so we could form a band.  Although we never did form that band, we have played together – and Dave has been making music ever since.

I Think the CIA are Tapping my Phone, Man (Whannel)

The three above tracks were recorded in the Summer of 1975 on Teac A3440 four channel recorder and were performed by:

Frank and I were in a band (AWD) between 1969-1972, and then occasionally got together to record during the 1970s.   In more recent years we sometimes get together to play through jazz standards, Frank having more application than I do, having become a rather decent jazz guitarist

For context on this stuff, see material from Aymeric Leroy’s detailed research into the Canterbury sound and related bands at:

AWD: obscure even by Canterbury standards